Three year old Evie Morgan has spina bifida and a Facebook page devoted to her journey to betterment at https://www.facebook.com/evieswarriors/. She was treated in Mexico by Nova Cells Institute doctors during April (2016) and soon her Mum, Heather, was emailing NCIM patient care coordinator, Grace Odgers PhD cand., a series of positive reports and video clips.  Heather also made posts to the aforementioned Facebook page — three of which follow further down below.

We felt very comfortable in the hospital. The room was very clean and had a private bathroom and sink. The pediatrician, Dr. Sanchez, was amazing and Evie loved her so much. Dr. Sanchez spoke great English and we had no trouble understanding her at all. The nurses were very attentive to whatever it was that Evie needed and Grace was always right there to translate for us if they had questions or we wanted to say something. The procedure was quick and painless. Within 5 minutes of receiving the treatment Evie began moving her toes. In the week and a half since treatment Evie is still able to move her toes on command (prior to treatment Evie only had very little involuntary movement of her toes), she is urinating more on her own and has very increased balance. She is now beginning to walk much longer distances with her canes (before she had a walker). At her next urology appointment we are going to be able to start discussing next steps in seeing how her bladder can fully function without medication. We are very pleased with the results we have seen thus far and can’t wait to see what else Evie is going to do!

This video was taken 2 days after stem cells. Evie is now able to move her toes on command! Before it was completely involuntary movement. Pardon her sassiness at the beginning 😂 Evie also has incredibly improved balance and is able to walk much longer distances with her canes! ‪#‎evieswarriors‬

Evie is showing improvements in her bladder function and abilities since yesterday. We aren’t sure if this is going to be a consistent thing but we are definitely watching now. This is nuts.

Sorry for lack of updates. Everything went perfectly and the treatment is now complete. Within minutes Evie was flexing her right ankle when asked and wiggling all 5 toes. Some of the movement is involuntary right now as the cells are being repaired. We will continue to see results for a few months. Thank you all for supporting our girl! ‪#‎evieswarriors‬

MAKE YOUR OWN ANTIVIRAL FACE MASK COATING AT HOME 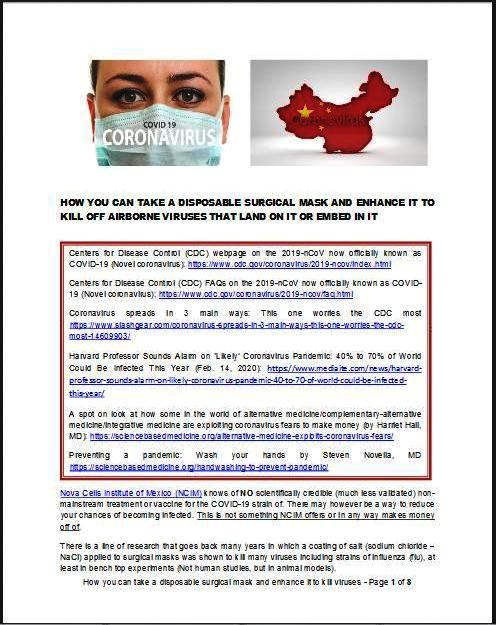